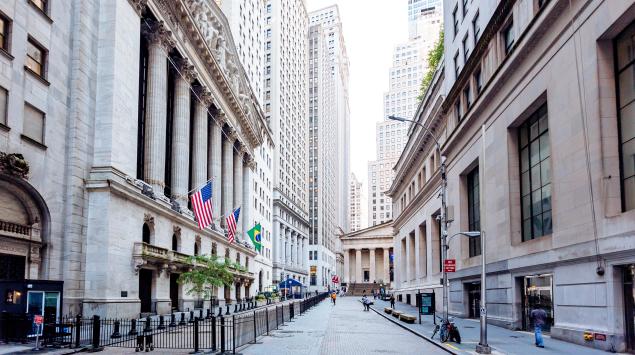 Yahoo Finance’s Brian Sozzi and Alexis Christoforous break down today’s market action with Invesco Global Market Strategist Brian Levitt.
This story has been updated.
Two more retail stalwarts have bitten the dust.
Lord & Taylor — the oldest U.S. department store founded in 1826 — filed for Chapter 11 bankruptcy protection on Sunday after being crippled by COVID-19 store closures. The company was purchased for $100 million from Hudson’s Bay by fashion startup Le Tote in 2019. Le Tote also filed for Chapter 11.
Lord & Taylor has 38 stores to its name.
Not to be outdone, Men’s Wearhouse owned Tailored Brands also filed for Chapter 11on Sunday. The company said it had received $500 million in debtor-in-possession financing from existing lenders. It was just several weeks ago when Tailored Brands said it would close 500 of its 1,500 stores and cut 20% of its workforce.
The retail deaths have piled up this summer.
Ascena Retail Group, the owner of Ann Taylor and Lane Bryant, finally filed for bankruptcy protection in late July. The company, which has been circling the bowl for years, will look to the courts to help it shave $1 billion in debt. But it’s likely the retailer will be far slimmer post bankruptcy than its current 2,800 store count.
Regional retailer Paper Store filed for Chapter 11 in July as well. The operator of 86 stationary and card stores in the Northeast said it’s looking for a buyer.
New York & Co. parent company RTW Retailwinds also filed for Chapter 11 bankruptcy protection in July after years of growing irrelevance in malls. The women’s apparel company — which changed its name to the bizarre RTW Retailwinds as part of a rebranding in 2018 — operates 378 outlet and and mall-based stores across 32 states.
It may close all of its stores as part of the filing.

“The combined effects of a challenging retail environment coupled with the impact of the Coronavirus (COVID-19) pandemic have caused significant financial distress on our business, and we expect it to continue to do so in the future. As a result, we believe that a restructuring of our liabilities and a potential sale of the business or portions of the business is the best path forward to unlock value. I would like to thank all of our associates, customers, and business partners for their dedication and continued support through these unprecedented times,” said RTW Retailwinds CEO Sheamus Toal in a statement.
Indeed it has been a brutal time for retail amidst the pandemic.
Brooks Brothers filed for bankruptcy in July, too. It has been dealt a twin blow to its finance from closed malls and a shift away from preppy clothing. A consortium of investors are now fighting to buy the stricken retailer. And apparel company Lucky Brand Dungarees announced on July 3 that it is filing for Chapter 11 bankruptcy.
GNC has walked through death’s door after knocking on it for years. The 85-year-old vitamin seller filed for bankruptcy in late June after years of battling waning sales and a debt load north of $1 billion. GNC plans to shutter up to 1,200 stores across the U.S. The company operates more than 5,800 stores.
Fellow mismanaged mall dweller J.C. Penney said in June it will close another 13 stores as part of its recent bankruptcy filing. The company told the courts in May it would shutter a total of 250 stores by the end of summer 2021, leaving it with a shade under 600 locations.
The company reportedly has received a $1.75 billion offer from Sycamore Partners, which is allegedly keen to close down J.C. Penney stores and slap them with the Belk name — another department store the private equity firm owns.
To be sure, 2020 is shaping up to be one of the deadliest ever for the former icons of the mall and various shopping centers. The pandemic has kept stores closed for months and sent sales for the sector into a tailspin. With consumers only slowly venturing back out to stores after months of being quarantined, retailers are being faced with the reality they need fewer stores open...or should no longer be in business at all.
“Some companies are just not going to survive this,” says McGrail, who is the COO of one of the world’s largest asset disposition and valuation firms, Tiger Capital Group. Its McGrail’s team — which often includes store associates of a stricken retailer — that hangs the “Everything must go” signs and works to fetch top dollar on fixtures and other inventory.
McGrail declines to say which retailers have been calling him up for asset appraisals, except to note the names wouldn’t be any big shock.
Such is the current life for McGrail and others in the retail bankruptcy and restructuring fields. In talking to a host of experts, one thing is abundantly clear: A thunderstorm of bankruptcies in retail are about to rain down on Wall Street thanks to the aftershock of the coronavirus.
Once formidable retailers such as Neiman Marcus (filed for bankruptcy in May) will either vanish entirely or emerge from bankruptcy with 75% smaller store networks. Those retailers that somehow manage to avoid bankruptcy by way of a creative debt raise or other restructuring will find the road ahead bumpy at best.

While bankruptcies from Lord & Taylor, RTW Retailwinds, Ascena and Brooks Brothers are headline makers, the fact is we haven’t seen a stronger uptick in bankruptcies just yet for several reasons, experts explain.
First, preparing for a structured entry into bankruptcy typically takes two to three weeks. Retailers were only thrust into mass social distancing driven store closures in mid- to late-March. Most held out hope they would reopen stores in April, which pushed off bankruptcy planning. Secondarily, even the worst positioned big name retailers still had enough cash on hand to move through April and May (especially with workers furloughed) — that allowed executives to consider all options besides a headline-grabbing bankruptcy.
And lastly, one of the benefits of a retailer filing for bankruptcy is to raise cash for creditors by holding store closing sales. That couldn’t happen with state mandated store closings.
Now all bets are off this summer as states allow malls and retailers to slowly reopen. The situation remains precarious at best though — with COVID-19 infections rising again, it’s reasonable to expect malls and stores are shutdown.
“I think many of these companies will file [for bankruptcy], and it’s not a handful. It’s several dozen. And that’s a scary number. It’s far more than we have seen over the last several years combined,” says Stifel managing director Michael Kollender, who leads the consumer and retail investment banking group for the firm. Kollender and his colleague James Doak at Miller Buckfire (Stifel’s restructuring arm, where Doak is co-head) have worked on dozens of consumer and retail bankruptcies in recent years, including Aeropostale, Gymboree and Things Remembered.)
“We will see some major chains go away and not come back. These are chains that were struggling before the situation. COVID-19 will put them over the ledge,” Kollender adds. Doak thinks there will be numerous creative deals struck by retailers in a bid to stay afloat — for instance a mall owner takes a stake in an anchor tenant.
There is precedent here as it was a consortium of mall owners, Simon Property Group and General Growth Partners, that won the auction for Aeropostale’s assets in 2016. Both had an interest in keeping Aeropostale open as it had been an important traffic-driving (and rent-paying) tenant for years.
To Doak’s point, the creativity by retail executives looking for a lifeline are starting to emerge.
The aforementioned bankrupt J.C. Penney is rumored to be eyeing a sale to private equity shop Sycamore Partners, which has a long history of buying distressed retailers. J.C. Penney reportedly has also caught interest from a consortium of landlords Simon Property Group and Brookfield.
Macy’s essentially mortgaged its future with a recent $4.5 billion debt raise in a bid to survive the year.

It has only just begun

Most of the experts Yahoo Finance chatted up expect some degree of chaos to ensue as retailers reopen their stores this summer. It’s already unfolding by the looks of things.
Thousands of stores across the country right now are sitting on badly aged inventory inside of their closed — or reopened — stores (see photo above). That dust-collecting stuff will have to be sold at fire-sale prices — the problem is that everyone in retail will be doing the same exact thing this summer, leaving retailers to earn a horrific return on that inventory investment.
Investors should expect sizable inventory write-downs for the second quarters and as one result, and chains may not be able to borrow as much as possible against their asset bases. That’s a terrible position to be in ahead of the high working capital period known as the holiday shopping season.
“I don’t think J.C. Penney has a long-term future. I’m not so sure whether Macy’s has a long-term future. I think the occupants of those B and C malls — the specialty stores that congregate the concourses that are increasingly vacant — may not have a future. We’re seeing an enormous number of store closings being announced and even from the successful chains like Zara,” said former Sears Canada CEO turn Columbia Business School professor Mark Cohen on Yahoo Finance’s The First Trade. “So I think the breakage will be extraordinary and we’re seeing the first signs of it.”
Meanwhile, store liquidations and their rock bottom prices for merchandise will pressure efforts by stronger chains to get their businesses going. That will make relatively strong retailers far less strong. For those retailers seeking to emerge from bankruptcy, vendors are likely to be tepid to ship them product while at the same time tightening payment terms. That one-two punch usually kills a wounded retailer for good.
Then there is the general uncertainty on how people will view going back to the mall in the new normal of social distancing. That fog of war is poised to persist well beyond the coming holiday season.
“We are in a retail tsunami,” Kollender says.
Tsunamis are destructive. And so will be th

at August 03, 2020
Email ThisBlogThis!Share to TwitterShare to FacebookShare to Pinterest