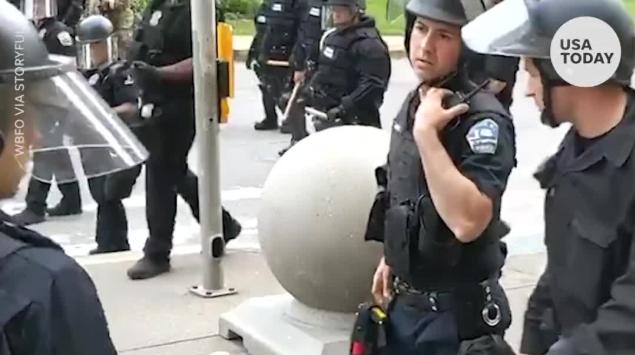 Scroll back up to restore default view.
Martin Gugino, the 75-year-old man who fell to the ground after being pushed by Buffalo police officers last week, sustained a brain injury related to the incident, according to his attorney.
Gugino, of Amherst, New York, had been in serious but stable condition before his condition was upgraded to fair earlier this week. He was moved to Erie County Medical Center’s rehabilitation floor.
On Thursday, his lawyer, Kelly Zarcone, said Gugino’s brain is injured and he has started physical therapy.
“Martin is a soft spoken but thoughtful and principled man,” Zarcone said in an emailed statement. “As heartbreaking as it is, his brain is injured and he is well aware of that now.”

Given this development, he does not plan to do media interviews, she said.
“He feels encouraged and uplifted by the outpouring of support which he has received from so many people all over the globe. It helps,” Zarcone’s statement continued. “He is looking forward to healing and determining what his 'new normal' might look like.”
Gugino was one of several dozen individuals standing in front of Buffalo City Hall at about 8:10 p.m. on June 4, after a peaceful protest held in the area had dispersed.
Longtime activist: Elderly Buffalo man pushed to ground by police 'comes from a peace tradition'