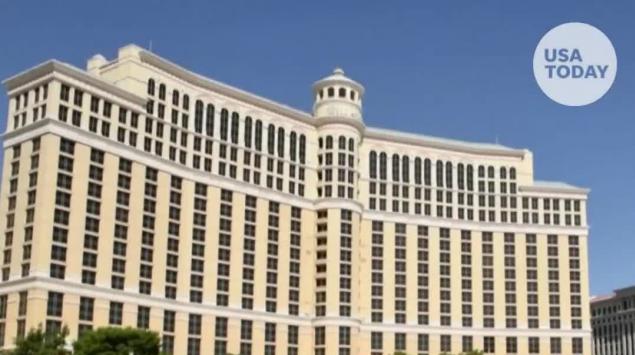 Scroll back up to restore default view.
Las Vegas is going ahead with its heralded reopening plans despite George Floyd protests that turned deadly earlier this week.
An armed protester was killed and a police officer was critically injured in separate shooting incidents overnight Monday during protests prompted by the death of George Floyd last week after a Minneapolis police officer knelt on his neck for several minutes.
Tuesday night's protests were more peaceful. No curfews have been announced, but Nevada Gov. Steve Sisolak on Tuesday activated additional members of the Nevada National Guard to support state and local law enforcement.
"The Nevada National Guard units will not be on the front lines, making arrests or doing crowd control,'' Sisolak said in a statement. "Their mission is to act as support personnel, and they will focus on protecting critical facilities, preserving public safety, and allowing individuals to exercise their rights to peacefully demonstrate."
Under Nevada's reopening plans, the gambling and entertainment capital's casinos are allowed to start reopening at 12:01 a.m. Thursday after being closed for more than 2½ months by coronavirus concerns.
The Miracle Mile Shops, a Strip shopping mall attached to Planet Hollywood that was originally slated to open Thursday, announced on Twitter it was moving its opening date to June 9 "out of an abundance of caution," though it did not mention the protests specifically.
The shutdown of casinos, hotels and attractions, which began mid-March, has been devastating to the state's visitor-dependent economy. Las Vegas counted just 106,900 visitors in April, down 97% percent. In January and February, before coronavirus crushed travel demand, Las Vegas welcomed more than 3 million visitors.

What will open first in Las Vegas?

The Fremont Street Experience, a pedestrian mall with a signature light show, zip line and shops in downtown Las Vegas, will kick off the reopening party onWednesday, with plans to reopen at 9 a.m. local time.
Wednesday afternoon, many downtown casino hotels, including the Golden Nugget and The D, will reopen to guests who want to gamble the second the slot machines are turned on and table games resume.
The big push is scheduled for Thursday morning, when casino giants MGM Resorts and Caesars Entertainment will reopen some of their Strip properties. First up for MGM Resorts: the famed Bellagio fountains are going to be turned back on.
MGM Resorts, which has a dozen hotels on The Strip, is opening Bellagio, MGM Grand and New York-New York on Thursday, followed by Excalibur next week.
Caesars' first hotels to reopen: Caesars Palace and Flamingo, both due to open Thursday morning. Harrah's will open on Friday.
Wynn Resorts, which operates the luxury Wynn Las Vegas and sister resort Encore, had planned to allow gambling as of 12:01 a.m. but shifted those plans to Thursday morning.