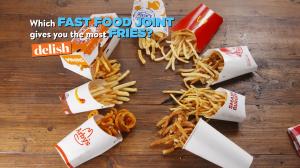 Scroll back up to restore default view.
From Delish
Last week Milton, Florida, local Haley Leach posted a video to Facebook showing a male employee bathing in the kitchen sink of a nearby Wendy's. She commented, "I don’t suggest anyone eating at the Milton Wendy’s again 🤮 🤮 🤮". Since then, the video has gone viral at 1.1 million views and more than 16 thousand shares.
While many took to Facebook to comment on how disgusting this was and how this teenage boy should be reprimanded, others found that all of this was a dramatic overreaction to immature teenage behavior. 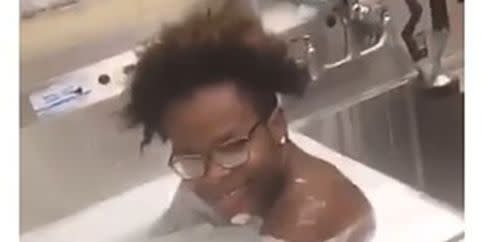 Regardless, with that much media attention, this unsanitary behavior was difficult to ignore. A day after the incident occurred, inspectors from the Department of Business and Professional Regulation visited the Milton Wendy's (the restaurant did, in fact, pass a routine sanitation inspection on Tuesday).
According to the Pensacola News Journal, it appears that the employee was also fired soon after. The paper was able to reach out to Carlisle's (the company that owns this particular Wendy's) marketing director Mike Johnson who commented via email they are "taking this incident seriously and it is obviously totally unacceptable. This was a prank by a person who no longer works at this restaurant, and who clearly did not use good judgment."

While we totally agree this behavior was unacceptable, many news outlets have repeatedly referred to this teenage boy as a "man." That appears to be incorrect, as the person who posted the video has since claimed she knows the employee from their current high school, which would mean the employee in question is likely a teenager-a boy.
There have also been no comments on whether or not other employees in the video have been terminated as well, particularly the one who posted the video to Snapchat. Encouraging this boy to "take a bath" and "get in there" isn't necessarily great behavior either. Lastly, it's clear that no one involved the situation thought Oh, maybe we'll get in trouble with our manager for this...I think you get where I'm going with this.
No tea, no shade, but please remember there's never just one person to blame.
('You Might Also Like',
at June 13, 2019
Email ThisBlogThis!Share to TwitterShare to FacebookShare to Pinterest