A youth baseball game between 7-year-olds in Lakewood, Colo., devolved into an all-out brawl between parents on Saturday, leading to injuries, several citations, and a plea from the police for more information.
What started the brawl, according to the Denver Post, was a call from a 13-year-old umpire. A police spokesman didn’t offer any additional information on what the call was or why it started a brawl between parents who were supposed to be watching a game played by their young children.
The Lakewood Police released a video of the melee, and it’s exactly as bad as you think it is.


The video clip shows the brawl in progress, but doesn’t show how it began. Thankfully, it looks like the young umpire and the 7-year-old baseball players had cleared the area by the time that portion of the fight got underway.
Not surprisingly, several injuries were reported. According to the Post, the police also issued a number of citations for disorderly conduct and fighting in public.
But there may be a more serious charge to come out of this fight. Police are specifically looking for the man in teal shorts and a white T-shirt, who could be facing an assault charge. The video released by the Lakewood Police contains a slow motion replay of that man appearing to sucker punch another man in the head while he was facing another direction. A blonde woman then pushed him away while someone else cradled the assaulted man’s head.
This all happened over a call a 13-year-old umpire made at a baseball game between 7-year-olds. Parents at youth sporting events need to collectively calm down and remember: it’s a game, they’re kids, and most of them just want their postgame snack.
More from Yahoo Sports: 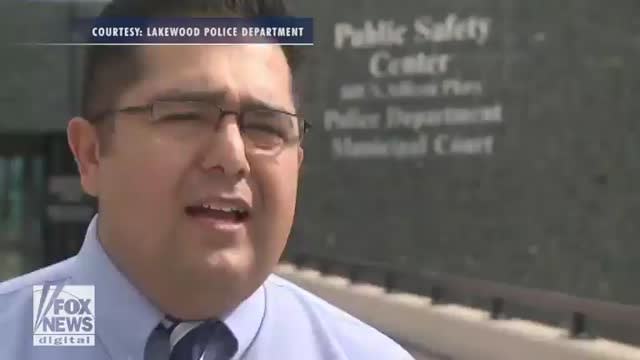 Lakewood, Colorado police investigate cause of fight at baseball game for 7-year-olds.

Samuel Osborne,The Independent 3 hours ago
Police have launched a manhunt after a mass brawl broke out among parents watching abaseball game between a group of 7-year-olds.
Footage of the fight shows several adults fighting among themselves, in Lakewood,Colorado.
They were apparently “unhappy” with the game and the judgement of a 13-year-old umpire,Lakewood Police Department said.
The force appealed for information about the identity of a man wearing a white shirt and blue shorts, who can be seen punching another man in the back of the head and sending him tumbling to the ground.
Several people were injured and one was badly hurt, the department added.
Several of those involved received citations for disorderly conduct and fighting in public, John Romero, a spokesman for Lakewood police, told The Washington Post.
He said the brawl began after adults argued over a ruling “one side didn’t like”.
Mr Romero said the man in a white T-shirt and blue shorts could face an assault charge.
Other adults could face similar charges in addition to child abuse charges if they are found to have put any children in danger, he added.

- June 20, 2019
Email ThisBlogThis!Share to TwitterShare to FacebookShare to Pinterest