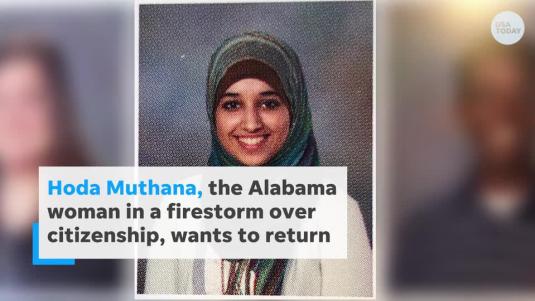 Scroll back up to restore default view.
ROJ CAMP, Syria – Hoda Muthana is pushing a stroller in the middle of a conflict zone here and if there's a textbook example of extremism, this probably isn't it.
That's partly because of what is in Muthana's arms: Adam, her 18-month-old son. He’s a cute kid. Bright brown eyes, like his mom. His tiny hooded coat is emblazoned with patterns of elephants in profile. Some are upside down.
What Adam couldn't know is that his mom abandoned the comforts of a suburban American life for one of the world's most barbaric terror organizations.
The Trump administration believes Muthana, 24, born in New Jersey and raised in Alabama, is too big a threat to the United States to return.
"They don’t seem to want to understand what happened in my life that led me to this depraved path. I didn’t just wake up in the morning and decide to join the most horrendous jihadist group in history," Muthana said, speaking to USA TODAY from the camp in northern Syria where she has been detained by a U.S.-backed Kurdish militia since last year amid the collapse of theIslamic State group's self-proclaimed caliphate.
The interview took place in a small office equipped with little besides a few well-worn chairs, a heater and a wall-mounted television with wires protruding every which way.
Muthana snuck off to Syria in 2014 at age 19. She married Islamic State, or ISIS, fighters and exhorted her fellow Americans to commit mass murder and terror attacks.
She now is at the center of a political, legal and diplomatic firestorm that carries far-reaching implications for the way the U.S. confronts Americans who join extremist groups. Muthana's story is equally about hindsight, about radicalization's hidden indicators and warnings signs that can be extremely hard to detect.
Trump on Muthana:Should Muthana be allowed to return from ISIS for trial in the U.S.? President says no
Ruling: Hoda Muthana, who married into ISIS, won't get fast-tracked case, federal judge rules
For many, it is about testing the limits of American compassion.
Muthana used to be devoted to a terrorist organization known for beheadings and other gruesome violence, which they recorded for recruitment videos. She helped circulate these videos on social media. Now she wants to return to the U.S. with Adam, whom she conceived with one of the ISIS fighters she married in Syria – and outlived.
But there is a major obstacle in her way: President Donald Trump.
The president does not want to let Muthana come back to the U.S., even though she has expressed remorse for her actions and is willing to face the U.S. justice system and near-certain jail time. Trump is trying to block her return in a court case that raises constitutional questions about Americans' citizenship rights.
More: ISIS bride Hoda Muthana's family files lawsuit against Trump
Timeline: Hoda Muthana joined ISIS as it was shocking the world
Yet the legal fight has overshadowed what is perhaps an even more fraught question: How did a quiet and by all accounts respectful high school student transform into a would-be terrorist who aggressively called for the deaths of Americans?
"I would like to apologize to all Muslims for what we’ve done, we painted such a horrifying picture of Islam to the world, it's practically unforgivable. ISIS ruined my life and my religion," Muthana said at Roj Camp, the Kurdish-run holding facility where she is being held with about 1,500 western wives and children born to ISIS fighters.
"I don’t want to think about what will come of me if I am not allowed to go back home. It's bleak. I don’t think I will survive," she said, as she recounted snippets of her journey from Hoover, Ala., via Turkey, to Syria's war-ravaged battlefields.
Outside, the melodious chirps and trills of birdsong could be heard and pockets of green meadows interspersed with oil fields stretched to the horizon.
"Sometimes I think if I didn’t have Twitter, I wouldn’t be here," Muthana said.


at April 06, 2019
Email ThisBlogThis!Share to TwitterShare to FacebookShare to Pinterest