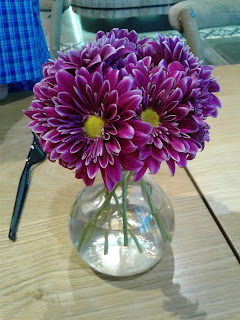 Muslim American women discuss common misconceptions about the hijab. This is from a series of short films called The Secret Life of Muslims, created by filmmaker Joshua Seftel. USA Today 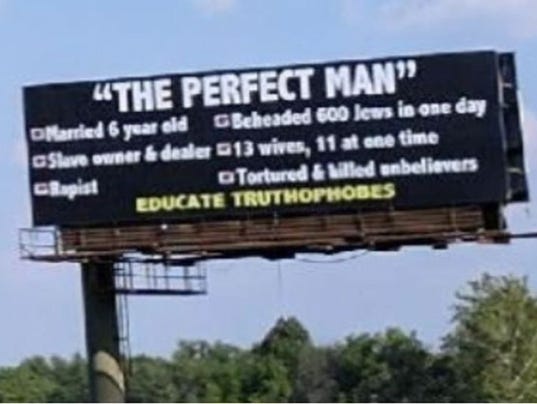 (Photo: Provided by Rima Shahid via The Indianapolis Star)
3238CONNECTTWEETLINKEDIN 189COMMENTEMAILMORE
INDIANAPOLIS — An anti-Muslim billboard disparaging the prophet Mohammed that can be seen from an Indiana highway on the east side of Indianapolis is drawing concern from local Muslims.
Now, Islamic leaders in Indianapolis are challenging those responsible for what they say are offensive and untrue statements to stand by their words, shed their anonymity and explain their motivations.
"It is a horrible billboard. I'm outraged by it, but saddened at the same time ...  and I would like to know who is behind it," said Rima Shahid, executive director of the Muslim Alliance of Indiana. "It seems very cowardly to me. If you have some kind of stance, you should want to stand up next to your statement. I didn't think there was any room for hate in our city. This billboard tells me otherwise.
"This kind of rhetoric just furthers division in our state and makes a neighbor question a neighbor, just like I am today."
More: Facebook posts in Pakistan can be deadly — especially fake ones
Shahid said the billboard, which she saw on southbound Interstate 465, was brought to her attention Friday by an anonymous tipster.

STORY FROM BLEECKER STREET
K9 companions impacted ‘Megan Leavey’ stars on and off screen
The all black billboard has a headline of "The Perfect Man." Underneath are six bullet points to describe that man. These points include "married a 6-year-old," "slave owner & dealer" and "13 wives, 11 at one time."
At the bottom of the billboard in yellow sits the words "Educate Truthophobes." A search of Truthophobes online leads to multiple anti-Muslim groups, specifically an Australian group with similar messaging.
U.S. Rep. Andre Carson, D-Indianapolis, said he believes the billboard is untrue and that the billboard's author takes Islamic text and history out of context "just like al-Qaeda, ISIS and the Klan do to religious texts to justify their bigotry."
Faryal Khatri, a spokeswoman for the Indianapolis-based Islamic Society of North America, said not only is the billboard not true, it is hurtful to her as a practicing Muslim.
More: Ariz. man gets 30 years for Islamic State-inspired attack
To Khatri, the most disappointing aspect of the sign is that it could incite hate crimes toward Muslims or people perceived to be Muslim.
Since 2015, anti-Muslim hate crimes have increased by 78% in the United States, according to researchers at California State University.


“This kind of rhetoric just furthers division in our state and makes a neighbor question a neighbor, just like I am today.”
Rima Shahid, executive director of the Muslim Alliance of Indiana
Last month, a 35-year-old white supremacist is accused of fatally stabbing two men and injured another who were defending two girls — one of whom was wearing a hijab — on a light rail train in Portland, Ore. In court, the suspected attacker, Jeremy Joseph Christian, called the act "patriotism."
Carson said he is disappointed that people have decided to use their free speech protections as a platform "to spread hateful, vile things that are divisive to people."
"I think there's a way to debate and be socratic without being disrespectful or undermining people and causing a sense of isolation."
Carson called on people in the faith community to "come together and say this is unacceptable," especially in light of an upcoming "March Against Sharia," that is scheduled to occur in 28 American cities — including Chicago, Indianapolis, New York and San Bernardino, Calif., this week.
The event is organized by a group called ACT for America, a self-described grassroots national security organization.
"Sharia is incompatible (sic) with our Constitution and with American values. We stand against female genital mutilations and child marriages," state the details of the event. A representative from ACT was not available for comment.
The billboard comes at a time when there is increased scrutiny of Muslims and Islam.
In December 2015, on the campaign trail, then-presidential candidate Donald Trump called for a "total and complete ban" on Muslims entering the U.S., to prevent terrorists from entering the country.
Carson calls it "fear-mongering."
There is no organization claiming responsibility for the billboard. Shahid said the billboard also doesn't bear any company name, indicating that it is privately owned.
"It's just a group of cowards who are not even ready to put their name behind it," Shahid said as she expressed the pain she felt to see this billboard in the midst of Ramadan.
"It is very hard ... and I would like to find the people who are behind this and talk to the them about who came up with these, and it seems appropriate to use this term, alternative facts.
"Muslims represent about 3% of our state's population. The fact is that most people have never met a Muslim, and there are so many misconceptions and so many divisions, and this kind of hate furthers those divisions."
Follow Fatima Hussein and Justin Mack on Twitter: @fatimathefatima and @justinlmack
3238CONNECTTWEETLINKEDIN 189COMMENTEMAILMORE

Apple unveils its plans for your next $349
usatoday.com
19 hours ago