things always come back to bite you in the ass

Rosemary Rossi,The Wrap 21 hours ago
Rachel Dolezal, the white woman who became infamous for identifying herself as a black woman for decades and running the Spokane, Washington, chapter of the NAACP, is jobless and fears she may soon be homeless.
In an interview with The Guardian about her upcoming memoir “In Full Color: Finding My Place in a Black and White World,” Dolezal says she’s jobless, has only been offered employment in reality television and porn films, feeds her family with food stamps and doesn’t know how she’ll come up with her March rent. She says that although she has applied for more than 100 jobs, no one will hire her even to stock shelves.
“Right now the only place that I feel understood and completely accepted is with my kids and my sister,” she said, claiming she can currently count the number of friends she has left in Spokane on her fingers.
Also Read: Rachel Dolezal Still Hints She's Black: 'I Don't Have Any Regrets About How I Identify' (Video)
Dolezal’s life began to unravel two years ago when a TV reporter asked her, “Are you African American?” and she turned from the camera and fled. Shortly thereafter, her Caucasian parents came forward with photos of her childhood as a freckle-faced blonde and claims that her roots are German and Czech, with traces of Native American ancestry.
Time has passed but wounds have not healed — she lost her jobs with the NAACP and Eastern Washington University, most of her family and friends are estranged, and the respect she had earned for her civil rights activism turned into disgrace.
“There’s no protected class for me,” she told The Guardian. “I’m this generic, ambiguous scapegoat for white people to call me a race traitor and take out their hostility on. And I’m a target for anger and pain about white people from the black community. It’s like I am the worst of all these worlds.”
Through the tribulation and disgrace, Dolezal still feels no shame.
Also Read: Rachel Dolezal Finally Admits: I Was Born White (Video)
“No, I don’t,” she replied, when asked if she thinks she had done anything wrong. “I’m not going to stoop and apologize and grovel and feel bad about it. I would just be going back to when I was little, and had to be what everybody else told me I should be — to make them happy.”
“In Full Color: Finding My Place in a Black and White World” will be available on March 28.
Related Video:
For more news videos visit Yahoo View, available now on iOS and Android.

at February 27, 2017
Email ThisBlogThis!Share to TwitterShare to FacebookShare to Pinterest

Rate President Donald Trump on His Job Performance
Vote in This Urgent Poll
Scroll Down
Newsmax.com, America's leading independent news service, is conducting an urgent national online poll about President Donald  Trump and his job performance as the nation’s chief executive.
The president’s job approval ratings are among the key indexes used to judge our nation’s leader.
Congress, the media and many in the public want to know what you think about the president’s job performance.
Newsmax will provide the results of this poll to major media outlets. Newsmax's results also will be shared with popular radio talk-show hosts across America.
Newsmax reports have been cited by major outlets, including CNN, ABC, Fox News, CBS, MSNBC, and other major networks.
Don't miss this opportunity to let your voice be heard.

Sign up below with your email address. Invalid emails will not be counted! After voting check your inbox to verify your vote and to get latest poll results.
Save time
This form can be completed with Facebook
E-mail Address:
Re-type E-mail:
Postal/Zip Code:
Country:


at February 24, 2017
Email ThisBlogThis!Share to TwitterShare to FacebookShare to Pinterest


‘You and your family are fired ... Love you’: Dozens lose jobs over immigrant protest

A sign hangs outside the closed Marco's Fish Market Thursday Feb, 16, 2017 in south Philadelphia's Italian Market. In an action called "A Day Without Immigrants", immigrants across the country stayed home from school and work on Thursday to show how critical they are to the U.S. economy and way of life. Jacqueline Larma AP
BY GREG HADLEY
ghadley@mcclatchy.com
In at least five states, roughly 60 people lost their jobs this week after they skipped work to participate in the “Day Without Immigrants” protest on Thursday, according to local media reports.
The protest, which was aimed at highlighting the importance of immigrants to the U.S. economy, called on all immigrants to not work or buy anything Thursday and succeeded in shutting down businesses across the country, according to CNN. It is unclear, however, how many people participated in the strike, according to ABC News.
Still, around five dozen people say their participation in the protest cost them their employment as businesses fired them for not showing up to work.
In Tulsa, Oklahoma, 12 Latino workers at the I Don’t Care Bar and Grill told KTUL that they were fired over text message because they did not show up for their scheduled shift and did not call in.
“You and your family are fired. I hope you enjoyed your day off, and you can enjoy many more. Love you,” the restaurant owner texted one employee, according to screenshots provided to the station.
The employees told KTUL that while they expected to be reprimanded for missing work, they did not expect to be fired. However, the owner maintained the move was not political and was simply the result of the bar’s strict “no show/no call policy.” The owner also told KTUL that others had been fired recently for the same offense. Tulsa Public Radio reports that the restaurant has already started looking for new workers.
In King of Prussia, Pennsylvania, six workers at Bahama Breeze restaurant were barred from entering the building on Friday after missing work Thursday, a local activist told the Philadelphia Inquirer. As in Tulsa, none of the workers told their boss they would be missing work.
The activist later said all the employees had been rehired after people called the restaurant to complain.
However, Darden Restaurants, the parent company of Bahama Breeze, disputed the activist’s claims, saying no one was ever fired in the first place, according to Rich Jeffers, a spokesman for the company.
In Nolensville, Tennessee, 18 people were fired from Bradley Coatings, Incorporated, a local painting company, according to News Channel 5. The people fired told the news station that they informed their superiors on Wednesday that they would be participating in the protest and that when they failed to show up the next day, they were all fired.
Bradley Coatings confirmed the firings to News Channel 5 in a statement but also insisted that the terminations were not a political statement.
“The reason these employees missed work — to engage in peaceful demonstrations — had nothing to do with BCI’s decision to terminate them,” the statement read. “BCI regrets this situation, but it has contracted with its clients to complete work on a schedule set by the client’s general contractor.”
In Lexington, South Carolina, employees of Encore Boat Builders LLC were told not to participate in the protest or they would be fired, according to WLTX. However, 21 workers did not show up for work and were accordingly terminated. The company declined to comment to WLTX.
In Bonita Springs, Florida, six staff members at a daycare are no longer employed. Two say they were fired for wanting to participate in the protest, while four others say they resigned in protest after their colleagues were let go. However, the daycare’s head told NBC2 that no one was fired and that all six quit.
All five states, like the vast majority of states in the U.S.,recognize at-will employment, which means employers can fire workers at any time without advance notice for any reason. While South Carolina, Pennsylvania, Oklahoma and Tennessee all recognize some exceptions to this doctrine, Florida does not,per the National Conference of State Legislatures.
UPDATE: This story has be
Read more here: http://www.charlotteobserver.com/news/nation-world/national/article133612984.html#storylink=cpy

at February 20, 2017
Email ThisBlogThis!Share to TwitterShare to FacebookShare to Pinterest

no surprise its the kings house

Jennifer Ashton Ryan,Robb Report Sat, Feb 18 3:00 PM PST
The Beverly Hills home that newlyweds Elvis and Priscilla Presley purchased in 1967 has hit the market. The King of Rock ‘n’ Roll and his young bride paid a small fortune of $400,000 (just under $3 million today) for the 5,367-square-foot home in the exclusive Trousdale Estates enclave. At the time, the neighborhood of luxurious mid-century homes—designed by renowned local talents like Richard Neutra and Wallace Neff—was fast becoming a community for Hollywood’s rich and famous.
Throughout their residency at 1174 Hillcrest Road, the Presley’s enjoyed many a personal and professional milestone. In 1968 the couple came home with newborn Lisa Marie; later that year, Elvis made his return to live music with his ’68 Comeback Special performance (a program that topped out the season for NBC). Elvis famously signed autographs at the home’s front gate, too. By 1973, however, the couple divorced and sold their once-happy starter home. 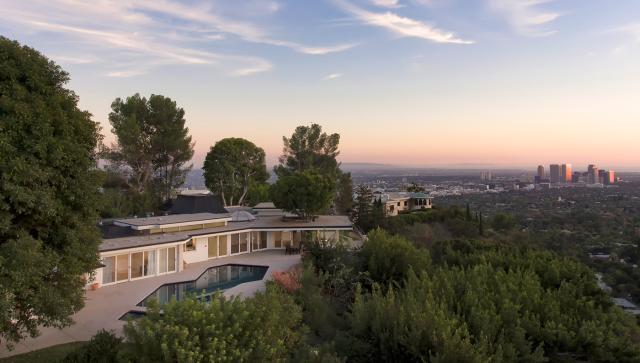 Little came of 1174 Hillcrest Road for the nearly four decades that followed. Fans still drove by for a picture every now and then, sometimes leaving notes behind by its front gate. It wasn’t until 2012 that the home was back in the news, when it was reported that Hard Rock Café co-founder Peter Morton—who had purchased the place for $9.8 million—planned to demolish it.
Public outcry ultimately saved the home; Morton’s plans thwarted, the businessman instead sold the property for $14.5 million in 2014. Now, just three years later, the French Regency estate is back on the market for an extraordinary $30 million. To be sure, the three-bedroom home has had more than a few updates over the years, with new flooring and electrical wiring, as well as luxurious additions like a pool, a spa, and a guesthouse. Still, the house’s best qualities—impressive city views and walls of glass throughout—remain unchanged since its Elvis days.
Time will tell if the Presley’s 1.18-acre estate has indeed doubled in value in just three years. Regardless of its sale price, the home’s place in rock ‘n’ roll history—not to mention the hearts of Elvis fans everywhere—is no doubt secure. (theagencyre.com)