I personally think this is  payback  for killing whales and eating shark fin soup ......mother  nature  has  away of paying back ...japanese  have no regard  for  animal life  .....so maybe they need  a kick in the pants .......

6.9-Magnitude Earthquake Strikes off the Coast of Japan: USGS 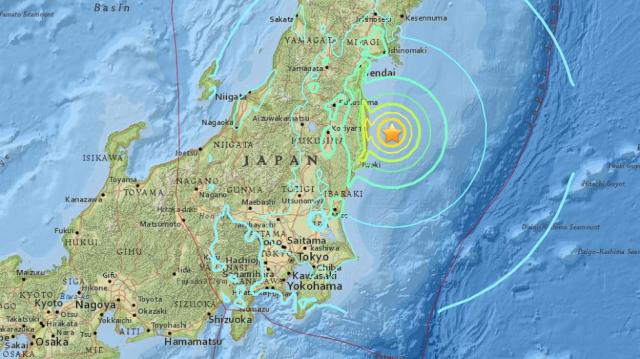 A 6.9-magnitude earthquake has been reported in Fukushima, Japan, according to the United States Geological Survey.
Tremors from the earthquake could be felt as far away as Tokyo, about 150 miles south of the epicenter. Hazardous tsunamis are possible for parts of Japan's east coast within 300 kilometers (about 186 miles) of the earthquake's epicenter, the Pacific Tsunami Warning Center said. There is no tsunami threat to Hawaii.
Fukushima's Iwaki City shore is detecting a tsunami now, according to the Japan Broadcasting Corp. (NHK), which is broadcasting a live shot from the city's Onahama port. A 2-foot-high tsunami was observed at the post at 6:49 a.m. local time.
Aomori Prefecture, north of Miyagi, detected a 3.3-foot tsunami, and another was detected south of Fukushima outside the shores of Ibaraki Prefecture, NHK reported.
The earthquake hit in the Pacific Ocean east of Japan just before 6 a.m. Tuesday local time, at a depth at 10 kilometers (about 6 miles), according to the Japan Meteorological Agency. A tsunami warning was issued for Fukushima's coast. A tsunami advisory was issued north and south of Fukushima, the agency reported.
People living in several coastal prefectures were told to evacuate immediately.
In March 2011 the same region was hit by a 9-magnitude earthquake, which unleashed a devastating tsunami that killed thousands of people. The tsunami caused a nuclear disaster when it hit the Fukushima Daiichi nuclear power plant, resulting in a release of radioactive materials.
The 2011 disaster was a triple threat, since Japan was hit with an earthquake, a tsunami and a nuclear meltdown within a matter of hours
- November 21, 2016
Email ThisBlogThis!Share to TwitterShare to FacebookShare to Pinterest
Newer Post Older Post Home