ebola a pandemic ..of epic proportions

The govt  does not care  about the  average person ,its a fact  if they did   things would not be  happening the  way  they  are.......the fact of the  matter is  the only time a  govt really  and truly gives  a fuck about you is  when you  vote  ....much like  joining the  military...as  soon as you  sign on the line  ....they do not give a  fuck ....its a ll  america  cares  about....i tel people  america is  not a country  ...its a business  pure and  simple .....as long as you understand  the intentions and  do not live constantly with your  head up your  ass  and understand ...its nothing personal  its  just business.....

Man Thought to Have Died From Ebola Awakes 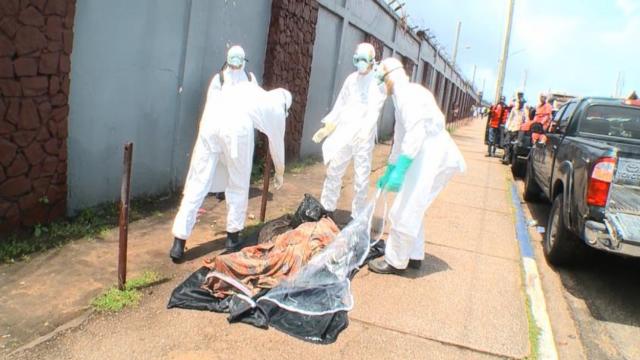 MONROVIA, Liberia -- Amid the deadliest Ebola outbreak in history, it's easier to get help if you are dead than if you are alive.
My producer and I were driving back from an assignment in Monrovia, where we filmed this morning's "Good Morning America" segment, when we saw a burial team working along the roadway surrounded by crowds of angry locals.
A community leader said they had been trying to get help for the dead man for days, but no ambulance ever came. When the man died, a burial team came in an hour.
Get the Latest News on the Ebola Outbreak
The Experimental Treatments That Could Stop Ebola
New Details on First U.S. Ebola Patient
What You Need to Know About Ebola

PHOTO: A burial team discovers a man thought to be dead was actually alive in Liberia on Oct. 2, 2014.
We watched as the burial team suited up and approached the body lying against a wall. They sprayed it down with bleach and moved it to a black, plastic sheet and began to wrap it up.

"We couldn't get him help when he was alive," a community leader told me. "They only come when you die."
Just then, the dead man moved his arm -- just a little, but clearly a sign of life.
"He's alive," someone yelled.
The burial team unwrapped him and put him back on the ground. The man was alive but looked like he would only last a few more hours.
About ten minutes later, an ambulance pulled up and a separate team of health workers loaded him into the back.
The crowd went wild cheering.

Watch: What It Takes to Enter an Ebola Ward